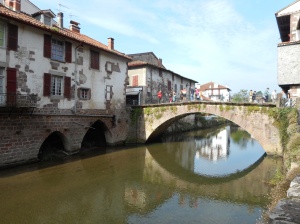 We have arrived at our starting point for the Camino – St. Jean Pied de Port! Our adventure is about to begin in earnest. Clint and I have found each other and we are firmly ensconced in our first albergue for the night – Le Chemin Vers L’Etoile.

St. Jean is the ancient capital of the Basque region of Basque-Navarre. Due to its strategic location just below several mountain passes into Spain it was once a key military bastion. The monumental Citadel above the town remains standing as testament to the importance of the city. In fact, Pied de Port (or, previously, Pied de Portes) translates to “foot of the pass(es).” Fierce battles were fought between Spanish and French/Basque forces in past centuries in this area due to the strategic importance of the town. Basque culture and language are still in evidence throughout the region and the Basque people remain fiercely independent and proud of their heritage.

For centuries St. Jean Pied de Port has been the principal gateway to the Camino and the starting point for pilgrims from all over the world. We saw many pilgrims in town today. All were easily identifiable by the backpacks on their backs. 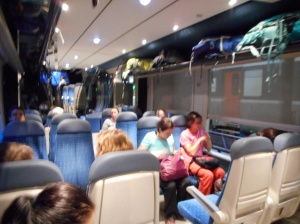 I began the morning quite early since the regional train from Bayonne to St. Jean left at 7:45am. At 7:30 the sky was just starting to lighten up. As far as I could tell, the 20 or 25 passengers on the train were all pilgrims, based on their luggage, which consisted solely of backpacks. I received my first “Buen Camino” greeting in the Bayonne train station. It was interesting that all of our equipment looked brand new. It will be even more interesting to see what it all looks like after a few weeks on the Camino. The topics of conversation all centered around Camino routes, equipment, and previous history on the Camino. There was a palpable feeling anticipation, expectation, excitement, and energy on the train.

Upon arriving in St. Jean I experienced an intense and overwhelming feeling of excitement at finally seeing first-hand this lovely medieval town that I had previously only seen in pictures. Everything is neat and tidy. The homes and buildings in town are very well-kept as were the homes in the villages we passed on our way here. We are deep in the French countryside, well off the usual tourist routes, and the landscape looks like a painting. I love it!

This morning, after visiting the Pilgrim Office and receiving my first official “sello” (rubber stamps documenting arrival at specific locations). (Clint just pointed out that we should have almost 50 or 60 similar stamps before we complete our pilgrimage.) We attended mass in the local parish church and were grateful recipients of a special pilgrims’ blessing from the parish priest after the service.

After some local sightseeing we checked into the albergue (actually, Clint had checked in when he arrived yesterday), and began participating in the daily routine of a peregrino – claiming a bed, taking a shower, and washing our clothes by hand. Next on the agenda is dinner being prepared by our hospitalero (albergue host). Then a good night’s sleep and our first Camino steps early tomorrow morning.