Larrasoana (Day 3 on the Camino)

Our weather for the past couple of days has been very good, although a bit warm and slightly humid. The worst part is that by noon or early afternoon the sun is beating down, you end up sweating a lot, and frequent stops and water breaks are required.

This reminds me that I am beginning to discover certain items of equipment that are pretty much essential, including items I had initially felt were probably not necessary or that I had never used before. The first is a water bladder/reservoir/Camelback. I had originally planned to simply carry plastic water bottles which I could refill as we walked through towns and villages. I didn’t want to carry the weight of 2 to 2-1/2 liters of water. But, at the last minute I was convinced to buy a water bladder. This has become a very valuable acquisition. I realized I would be carrying the weight of the water anyway in the plastic bottles. Plus, with the bladder I only fill up once a day and can take a drink through the plastic drinking tube without having to stop walking or fiddle around with water bottles – a much better arrangement.

The other items of essential equipment are trekking poles (walking sticks). I had never used these, even during my somewhat limited training hikes while still in the States. But they have proved to be a lifesaver. They act as an extra set of legs and are very helpful in maintaining your balance – especially with the 24 pounds of backpack on your body. And they are also remarkably effective in easing uphill hiking, since your upper body muscles, working through the walking sticks, can now provide some additional assistance to your leg muscles. Anyone contemplating their own Camino should make sure they use these.

A third item that I have found very helpful during these first few days has been Ibuprophen. Taking a few pills at the end of the day helps to ease the aches and pains of the over-stressed muscles you didn’t even realize you had.

Today, we continued on from Vizkarret to our goal of Larrasoana. Even though there were still some ups and downs, the terrain has begun to flatten out a bit. For a long stretch in this region the Camino has begun following the Rio Arga river. The sound of the babbling water is soothing as we walk along.

You are really never alone on the Camino, and we are enjoying our conversations with others on the trail or in the evenings at the albergues. Often the walking conversations only last a short while as different walking paces come into play. But the pilgrims we are meeting are all very warm, friendly, and eager to talk. We are a band of brothers and sisters, all in the same situation. We are meeting people from many nationalities – many from the US and Canada as well as from Spain, France, Germany, and beyond. Although it helps to have at least a smattering of foreign language proficiency, the lingua franca on the Camino is English.

We met a 25 year old engineering student named Attila who walked with us for awhile. He was born in Hungary but is now living in Germany. We have begun referring to him as Attila the Hun….garian. We talked about alternative sources of energy, car design, and a few other topics that you might not think would be common on the Camino. But, after we arrived in Larrasoana Attila chose to continue on to a further destination. So we may never see him again. But, we did enjoy his company for awhile. He needed to keep moving since he has to return to Germany soon to start his next round of engineering classes.

After arriving in Larrasoana we checked into the municipal albergue (only 8 euros) and got settled in. The daily routine we are falling into involves a hot (hopefully) shower as soon as possible, followed by some time doing laundry. The sweat-soaked clothes you have worn for the day must be washed by hand and hung out to dry. With these two chores done you can relax and think about walking around town and having dinner. Before dinner tonight, we had a couple of beers at the only bar/cafe in town – again, having engaging conversations with our fellow pilgrims from Ireland, Holland, Australia, and beyond. The Pilgrim menu tonight (for only 12 euros) consisted of the wonderful local specialty of garlic soup (which really tasted much better than it might sound), a delicious beef stew, and an ice cream bar for dessert. One can really get used to this relaxed lifestyle. 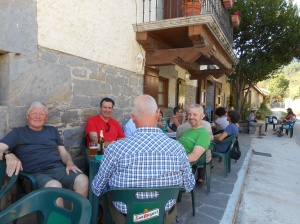 One of our drinking partners had a very interesting story related to his pilgrim credencial. This guy was from Ireland and he showed us that the first imprint (sello) in his credencial was from the Guinness Brewery in Dublin! And, while we found that amusing, he explained that there is a very valid historical reason for this. If you look at a Guinness label you will see the location of the brewery as St. James Gate – the same St. James we are going to visit in Santiago. This gate used to be in the medieval wall of the city of Dublin and was the starting point for Irish pilgrims on the Camino. So, today it is still traditional that Irish pilgrims begin their pilgrimage and get their first sello at the Guinness Brewery (and maybe have a pint or two). He also related an interesting factoid about Arthur Guinness and the brewery. When Guinness first opened the brewery he signed a 900 year lease on the property! I guess he was planning to stay around for awhile.