Walking across the verdant farmland in this part of Basque Spain we encounter beauty at almost every turn. The landscape has been flattening out slightly but the vistas remain breathtaking. We have been walking through a variety of farming areas, with corn and sunflower fields in abundance. The sunflowers are ready for harvest and no longer display their bright yellow countenances. It has been quite warm over the past few days, with temperatures reaching up into the upper 80s. The morning are delightful for hiking, but around noon it starts to become sometimes uncomfortably hot. But, we drink lots of water and rest in the shade whenever we can find some. My body has been complaining less over the past couple days about the abuse it has undergone and I am grateful for that. It is still hot and very hard work for an old guy like me, but I think I may be adapting more to the rigors of the Camino. 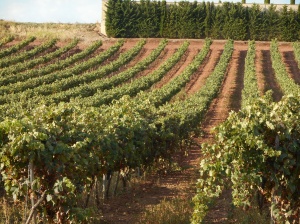 We have also begun to see more and more vineyards and olive trees. I had been wondering whether grapes intended for fermentation tasted as sweet as common table grapes. Well… the vines were there and they had grapes on them, so we conducted a little experiment and I can now confidently report that the wine grapes (at least the ones we tasted) were every bit as sweet, flavorful, and delicious as any table grape I’ve ever tasted.

As I mentioned before, this is a region of Spain that is fiercely independent and the Basque expressions of political leanings are everywhere. The local Basque language, Euskara, is spoken by most of the locals and signage is usually in the regional tongue. Euskara is a completely different language than Spanish and the locals consider it a badge of honor and a means to perpetuate their heritage to speak it between themselves. 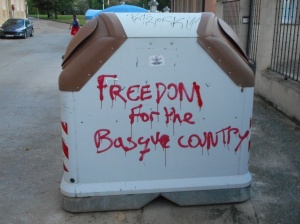 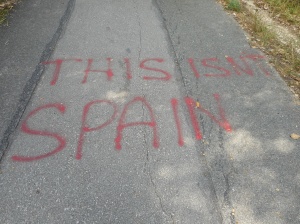 After leaving Cizur Menor yesterday we encountered a broad mountain range. The trail rose about 300 meters over about a 7 kilometers distance (about 1000 feet over about 4 miles) and the climb was challenging. This region has strong prevailing winds and the ridge line was populated by dozens of wind turbine towers generating electricity. At the very crest of the range we found one of the most iconic pieces of artwork on the Camino – a wrought iron depiction of medieval pilgrims walking the Camino with their heads bent against the wind. This is a popular resting place for pilgrims who have just finished trudging up the steep trail.

The far side of the ridge consisted of a fairly treacherous downward trail with lots of loose stones, making the hiking arduous as we slowly navigated our way back down to the plain below.

At the town of Muruzabal we had the option to take a less traveled path to see a church with roots connecting it to the Knights Templar, which were very active in the region in their time. The church was described as one of the gems of the Camino in our guidebook. The Knights Templar provided protection to pilgrims walking through this area where they were frequent victims of robbery or worse. We were also told that there was a small albergue located at the church and we intended to stay there for the night. Upon arriving, we found a beautiful, octagonal church, but no albergue – meaning we had several more kilometers of trail between us and Puente la Riena, our original destination, in the heat of the day.

We have been experiencing multiple examples of Camino grace as we move along the way (see Clint’s guest blog from a day or two ago.) In similar fashion, as we contemplated our fate at this church, the woman who cares for it magically arrived to lock up for the day and offered us a ride to Puenta la Riena, about 4.5 kilometers away! We were dumbfounded at the coincidence but gratefully accepted her generous offer. We think St. James may have been pleased that we had walked so far out of our way to visit this small church and decided to offer us this small grace. This has happened many times already and we look forward to seeing what we might encounter next.

Our habitation for the evening was a monastery hostel run by the Padres Reparadores which, although large, was perfectly adequate for our needs. We are getting used to sleeping in these dormitory situations with many, many strangers – men and women – sharing facilities and just getting along.

The magnificent bridge which gives the town its name was built under the direction of a local mayor’s wife to facilitate pilgrims in crossing the Arga river. Its six arches gracefully span the river to this day.

We also saw a magnificent altarpiece inside the 12th century Iglesia de Santiago. The carved masterpiece,which covers the entire inner facade of the building behind the altar, is covered in gold leaf and ranks with the finest I have ever seen.

Today marks the seventh day we have been on the Camino. We have now covered more than 100 kilometers, with just under 700 to go. Our goal for the day was the town of Estella. But, as we approached, we decided to stop a few kilometers short and stay in Villatuerte instead. We located a private albergue where, even though it was only about 2 pm, we got the last two remaining beds in the place. The countryside leading up to the town was mostly vineyards and provided very little shade. We had to climb a very steep traverse leading into the first town on the route, Maneru, and felt it must have been a bit of payback from the Camino for our short car ride yesterday.

And thus, we learned another lesson about the Camino… The Camino sees all and does not forget!