I experienced another Camino grace while staying at the albergue in San Juan de Ortega. This albergue is located in a tiny hamlet. My guidebook says that the population is only 20. I suspect it is a little higher – but, not much. The hamlet was originally established in the wilderness by San Juan in 1150 to provide services for pilgrims on their way to Santiago. The church has been providing food, comfort, and shelter to pilgrims ever since. The albergue is located next to the lovely church and a pilgrim mass is offered every day. For a number of reasons, I am not always able to attend the pilgrim masses, but tonight I decided to attend the service. However, the special grace I received came after the service. 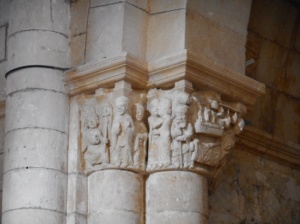 Atop the many columns within the church’s interior are carved stone reliefs with various religious motifs. One of them shows the annunciation of the Virgin Mary. This particular carving is placed in a location where a special phenomenon occurs only twice a year – on the vernal equinox (March 21) and on the autumnal equinox (September 21). On those days alone, the setting sun shines through a window and briefly illuminates the Virgin. As a Camino grace, my stay at this location happened to be on Sept. 21 – the autumnal equinox. It was an interesting coincidence. And after awhile, these occurrences start to seem more than random coincidence. These are gifts or graces from the Camino. 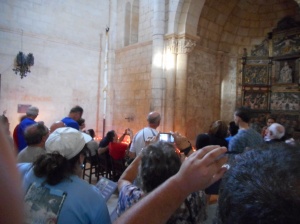 So, after the service, a group of peregrinos along with many of the local townsfolk, stayed behind and gathered in a small chapel where the column is located to witness this phenomenon. Even though the sun was obscured by clouds at the last minute, we did see the Virgin clearly illuminated (at least her feet were illuminated.) It was a special moment that won’t happen again until next spring.

By the way, I might add that when we can attend the pilgrim masses we are made to feel special. Throughout the service we can hear references to pilgrims and we look forward to receiving a special blessing from the priest at the end of each service. Even though the service is entirely in Spanish, we can follow along fairly easily and our ears perk up when, during the final blessing, we hear the priest blessing the “peregrinos” going to “Santiago de Compostela.” As I mentioned in an earlier posting, pilgrims temporarily give up their former identities and assume the new identity as a peregrino while on the Camino. And, it is an identity we are very pleased to have assumed.