Santiago (Day 42 on the Camino) 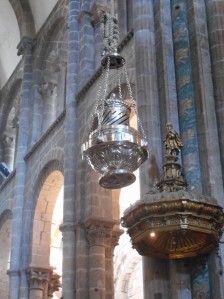 I guess you could say that today was the official end to our six-week long pilgrimage. First of all, we attended the pilgrim mass at the cathedral and received one of our final Camino graces – witnessing the swinging of the botafumerio, the giant incense burner for which the cathedral is famous. The botafumerio is not swung at every service, so we felt blessed to see it. The botafumerio is suspended from the ceiling by a very heavy rope and swinging this giant (about 6 foot tall) incense burner requires the efforts of six specially-trained men known as tiraboleiros. The ritual, performed at the end of the service, sends the botafumerio swooshing from one end of the side transcripts to the other, almost reaching the high, vaulted ceilings, and reaching very high speeds – I am told it reaches as high as 70 mph! – as it swishes back and forth in an arc probably reaching almost 150 feet in length while spewing forth copious clouds of incense smoke. To see this event in person is breathtaking and was nothing less than icing on the cake that has been our Camino pilgrimage – a true Camino grace. (Apologies for the quality of the photo below taken with my tiny point-and-shoot camera.) 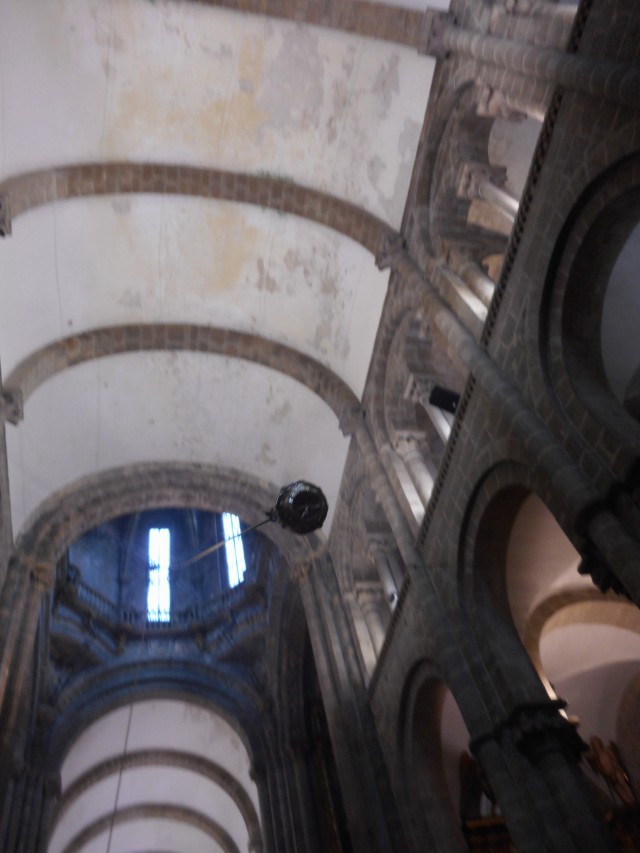 While in the cathedral we took the time to mount a stairway behind the main altar and embrace the golden statue of St. James which overlooks the church proper. Then we descended into a crypt underneath the altar to see the ornate silver casket where the remains of the apostle reside. It was a very meaningful and spiritual moment to be in the presence of one of Christ’s apostles and the personage who was the focus of this entire pilgrimage. 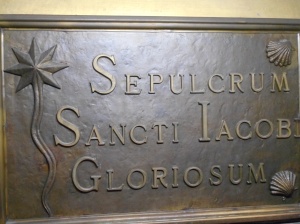 After the service we were blessed to meet up again with several of the individuals and families with whom we have been traveling for the past several weeks – some of whom we hadn’t seen for days or weeks. These were bittersweet meetings since we will likely never see these new friends again as we all go our separate ways and return to our homes and lives. We have felt like a family while on the Camino and have enjoyed sharing this unique experience together. Here are some photos of the people we have been walking with. (We also met up with Juan Jesus from Valencia, but unfortunately I didn’t get his picture.) 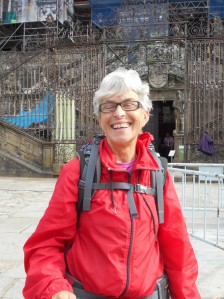 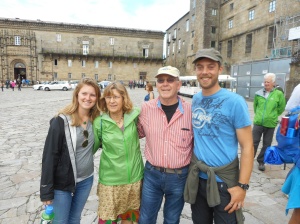 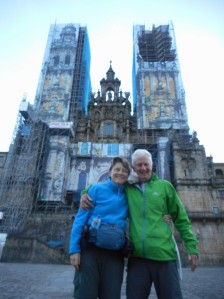 Ken from a town somewhere between Manchester and Liverpool, England and Elke from Austria 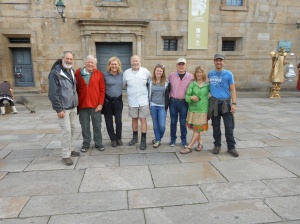 Clint and I along with Kate and Tom from Cincinnati along with others pictured above. 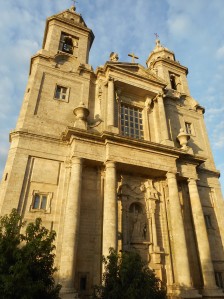 Later we visited the Pilgrim Welcome Office and received our Compostela document – in Latin and suitable for framing – documenting the official completion of our pilgrimage. By coincidence, the Franciscans, who are celebrating the 800th anniversary of their order, were also issuing a special compostela at their nearby convent and church. So, we visited their beautiful church and received this document as well.

Tomorrow we will begin a newer, and much shorter, extension to our pilgrimage as we head for Finisterre – the "end of the earth." We will be hiking for about 3 or 4 days and will arrive at the spot that medieval people thought was the very end of the earth. It is the westernmost point on the Iberian peninsula. The trail traverses a mountain range before descending to the sea coast leading into Finisterre. It is reportedly a very beautiful place and we are looking forward to seeing it in person in a few days. 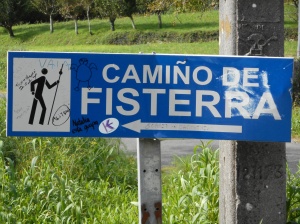 1 Response to Santiago (Day 42 on the Camino)