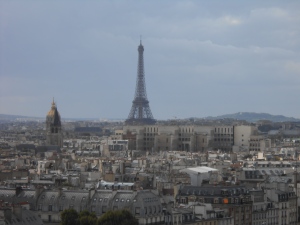 As I write this I am speeding across the French countryside on one of the famous high-speed TGV trains from Paris to Lyons. From there I will switch to local trains for the final stretch into Le Puy. It’s ironic to me that the way I start this pilgrimage – a intentional slowing down experience – is on a high-speed train. But being a train enthusiast I am loving it. The French countryside is beautifully pastoral with miles of well-tended farmland interspersed with picture postcard quaint towns and woodlands. It’s a powerful form of solace for the anxious soul.

I continue to approach this pilgrimage with some trepidation, but it has been noticeably easing the closer I get to that first step. I am sometimes criticized for over-planning my trips, but have to say that so far everything is going according to plan. I arrived in Paris yesterday morning after a pleasant and uneventful flight from San Diego. (That’s the way I like my flights!) My bag was one of the first off the baggage carousel and I made it through immigration and customs in only about 15-20 minutes! I made a detour to the train station (located within the airport terminal – this airport has been very well planned for the multimodal traveler – and picked up my tickets to Le Puy. Making my reservation on-line streamlined the process. All I had to do was stop in the SNCF (French rail service) ticket office and pick up the actual tickets. Merci beaucoup.

Next stop was my hotel, located right at the airport and accessible by the free airport rail shuttle plus a walk of less than a block. I chose the Ibis Styles hotel in part because it was nearby and was fairly inexpensive, but also because I’ve had previous positive experience with them. The hotel is no frills, but it’s fairly new, spotlessly clean, and totally adequate for the night. I’m going into this detail to reassure anyone who might be contemplating a similar trip and wondering how difficult it might be. All I can say is it couldn’t be a whole lot easier.

Since it was only about 11am and I was already in my room (having checked in on-line my room was ready when I arrived), I took advantage of the rest of the day to do a little sightseeing in Paris – only a 40 minute train ride from the hotel on the “Paris by train” line (RER B) to the St. Michael/Notre Dame station. 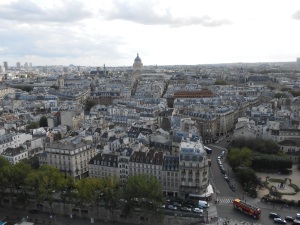 What can I say? People who know me will tell you that Paris is my favorite city. It’s the one city that looks just the way you had it pictured in your mind. The people are beautifully stylish and friendly. I love it! Paris, je t’aime! My intent was to limit my visit to places related to the Camino. No Eiffel Tower, Louvres, or Champs Elysees this time. Notre Dame Cathedral is the traditional starting point of the Paris Camino, so that was my primary focus point. I found a very long line of tourists waiting to enter the church at the security checkpoint, but spoke to the security guard about getting my pilgrim passport stamped and he ushered me to the very front of the line and I was in. So, another “Camino grace” enabled me to quickly obtain my first stamp and avoid a long wait in line. Sweet! 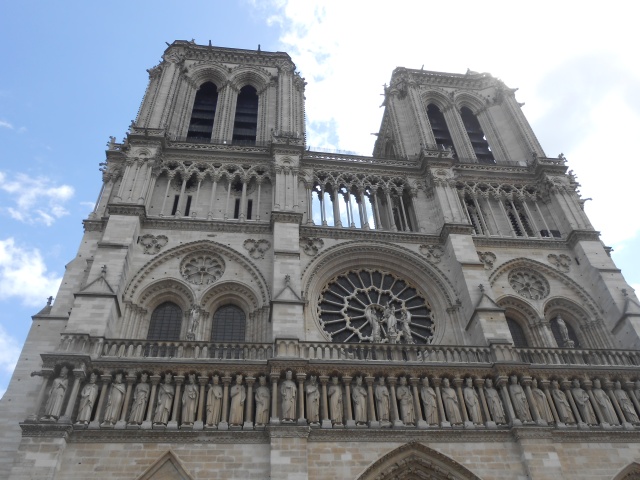 Aside from the onslaught of tourists – most of whom seem to have little or no reverence for the sacred spaces within – the interior of the cathedral is sublimely beautiful with soaring columns, exquisite stained glass, and religious iconography and artwork beyond compare. Attending mass later in the day was a highlight of my day with a traditional Latin liturgy, ethereal singing, and magnificent organ music that filled the sanctuary

At the recommendation of my wife, I registered to climb to the top of the cathedral towers – about 400 steps up several tight spiral staircases! They have instituted a fairly non-intuitive reservation process where you are assigned a tour time instead of waiting in line – in my case four hours away! They only allow groups of about 20 people at a time into the towers with a new group ascending every 10 minutes or so.

This provided me time to visit a couple of other Camino-related sights including the Tour St. Jacques (St. James Tower) and the Rue St. Jacques which was the route followed by pilgrims out of Paris over the centuries. I also found time for a bite to eat – faux filet and frites (not sure what “faux” filet is, but it was a cut of beef and tasted great.)

At my assigned time I returned to the checkin line for the cathedral towers, met a delightful young couple from Plymouth, England, while waiting in line and made the climb. While it was arduous, my legs felt fine (thank you for all that preparatory hiking in San Diego) and the views were magnificent. There is no better way to gain an appreciation for these towers than climbing up and experiencing them for yourself.

So, now after this whirlwind day, I have had a good night’s sleep and am off to Le Puy. I’m felling that I’m no longer in Kansas, as they say, but I’m feeling pretty good about life at the moment. I’m in a familiar mode of changing from my “normal” self into the persona of a pilgrim (pelerin in French or peregrino in Spanish). Within a day or two, I will be Peregrino Roberto once again and the adventure can truly begin.