As I write this I am sitting outside my gite for the night in the village of Marcilhac sur Cele. Having come by way of the river road rather than the rugged mountain route I have arrived before noon and the gite has not yet opened for the day. I am in the celebrated Cele River valley on the Cele “variant” of the GR65. The GR65 (grande randonee, or grand hiking route) is one of many long-distance hiking trails throughout France. GR65 is the route number assigned to the Via Podiensis or Way of Le Puy which runs in a generally southwestern direction from the city of Le Puy en Velay to the town of St. Jean Pied de Port (a distance of about 500 miles) where it connects with the Camino Frances in Spain. The CF then runs an additional 500 miles to Santiago, Spain, where the remains of the Apostle St. James are interred in a beautiful silver reliquary casket beneath the main altar. The cathedral in Santiago is the ultimate destination for pilgrims walking the Camino de Santiago.

The Cele River valley is flanked on each side by towering, sheer stone cliffs that rise hundreds of feet straight up from the valley floor. However, since I chose to walk the river road, today was a relatively easy day as the road followed the meandering Cele River and was essentially flat. I missed the opportunity to see the spectacular cliffside views of the valley that the variant is noted for, but my choice gave my body some time to recuperate a bit from the physically demanding trails I have been hiking for the past two weeks. While the scenery has been uniformly beautiful, the GR65 trail itself has been much more difficult for me than the Camino Frances was when I hiked it several years ago. So, I have decided to listen to my body and throttle back a bit when I am able. The walk is still extremely beautiful.

During this trip I have enjoyed the company of members of my somewhat fluid Camino family. I call it fluid since people are continuously joining and departing the group as schedules and walking paces demand. But there has been a core of about a dozen wonderful pilgrims who have been hiking roughly the same route and staying in the same towns along the way for the past week or two. The members are people from France, Germany, Canada, and the US. As I continue on I expect to make new friends even as the old ones part ways to return to their “real” lives or pick different destinations or routes.

I have also been happily welcomed by the French pilgrims who numerically dominate route. They are warm and exceptionally pleasant people who have gone out of their way to make me feel at home and part of the group since day one. This is in spite of my fairly limited French language skills (which are improving day by day.) Last night I was the only English speaker among the 14 people at dinner, but by the time the cheese course arrived at the end of the meal I felt comfortable and part of the conversation as we talked about our experiences to date on the route and our home towns and countries.

And, I have been enjoying wonderful meals every evening. We joke about the fact that, even after walking 6-8 hours a day, we are still putting on weight! I have opted for “demi-pension” (or half-board) as often as I can when making gite reservations. With this option, in addition to your bed you are served a home-cooked dinner, served family-style with the other pilgrims, and often featuring regional specialties and a European style breakfast. We enjoyed lentils du Puy for the first several nights and then aligot (a delicious mixture of mashed potatoes and cheese) for the next couple of nights. Everything has been delicious and it is around the dinner table that you get to know the other pilgrims and the Camino families form and grow. 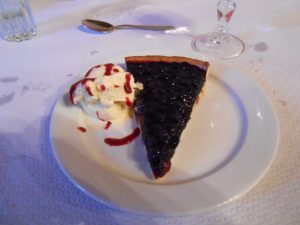 My poor old body has suffered a bit during this walk, partly due to the fact than I am older than I was three years ago and partly because of the significantly more rugged trail. But after a couple of weeks, I am getting more in shape and walking is not so difficult as it was at first. I have also had some minor issues with one of my feet, but that seems to be coming under control, too. While this hike seems (and really is) a grand adventure, it is at the same time a physically demanding experience. It’s not a walk in the park and anyone contemplating this hike would be well-advised to research and plan ahead carefully and try to prepare for it a much as possible before taking that first step.

My plans from here are to continue for the next few days through the Cele Valley and then reconnect with the main GR65 route. So far I have walked about 300km (about 190 miles) and still have about 485km (300 miles) to reach St. Jean. At that point I will decide whether to continue on to Santiago or to recognize that hiking 500 is far enough and return home. At best, it’s 50-50 odds at this point. We’ll see how it all plays out over the next few weeks. Stay tuned for updates as they become available.