The most beautiful town in France…

I am writing this from the medieval city of Conques, which is the most beautiful town in France. If you don’t believe it, there’s even a sign as you enter the town that will tell you so. In fact, this is the third “most beautiful town in France” I’ve been to this week. But, I can tell you… this one really is the most beautiful so far! It has delightful twisty, turny streets and timbered facades, like something out of Charles Dickens. There are very few straight lines and square corners in the village center, which only adds to its charm. 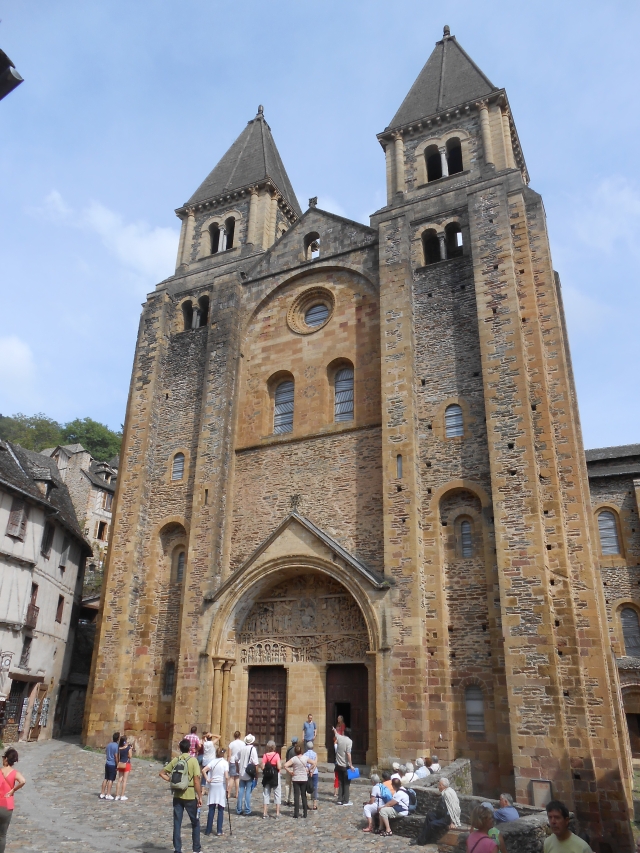 In the heart of the village is the magnificent Abbey Church of St. Foy. The tympanum above the main doors is one of the gems of 12th century French art and contains 124 separate carved figures depicting the last judgment in vivid detail. Many of the figures are shown going to their glorious heavenly reward. Others are not faring nearly as well. It is simply stunning in its detail and artistry. Tucked in around the edges of the tympanum are curious little figures who look like they are trapped behind the stonework and are peeking out, perhaps looking for a way to escape. The church itself has soaring interior vaulted ceilings and lends itself to the spiritual reflection and worship for which it is intended. I attended vespers a short time after arriving and compline (with a pilgrim blessing) later in the evening. Very spiritually fulfilling. 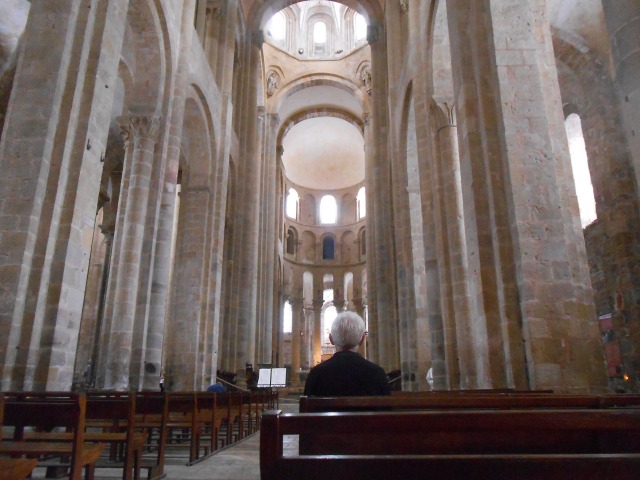 I chose to take today off as a rest day and rode the bus in from Estaing around noontime yesterday rather than walking. Since arriving in Conques I have been able to reconnect with perhaps a dozen of my Camino acquaintances. I keep hearing people calling out “Robert” and I meet up again with another familiar pilgrim. (In France, that’s pronounced “rho-bear”, by the way – and don’t forget to roll that “r” a little, if you can.). I am feeling revitalized and now know that it was a good decision to sit rather than walk today. Tomorrow I plan to resume the walk. I have been told that it’s not as brutal from this point on. Whew and thank goodness!

In the week or so leading up to today I have been humbled by the Camino. The first day was especially difficult since the straps on my backpack were not adjusted correctly and I was not in any semblance of trail shape. I experienced some doubt as to whether I could actually do this pilgrimage. But things improved remarkably after the straps were adjusted and the excruciating aches and pains disappeared. My confidence returned!

So far, it has been an exceptionally beautiful walk. But, the steep, rugged ascents and descents have been very challenging and the heat (90 degrees or so) for the past couple of days are what led up to my decision to sit one out for today. In addition, rain had been forecast for today, but it didn’t amount to much. Over the next several days I have been told the temperature and the trail difficulty will both moderate a bit.

Since leaving Le Puy en Velay I have crossed the Aubrac plateau and the Lot River valley. In the Aubrac, which many consider the most beautiful portion of the route, I found myself within a vast pastureland and lovely wooded forests. In several stretches I shared the trail with bovine herds, walking right among the cows. There were warnings not to touch or otherwise startle the cows and definitely not to walk between a cow and her calf. So, I was careful but didn’t have any problems. The herds were gentle and docile. All they seemed to be interested in was eating the grass and chewing their cud – such well developed cheek and jaw muscles! My guidebook says that as many as 50,000 head of cattle live in the area – the most common breed being the beige long-horned Aubrac. (No surprise there.) I think I saw most of them. The sound of cowbells was a constant pastoral companion. Most of the cattle are bred for meat, but the region is also noted for its cheese, which we are served at the end of dinner just about every night. The Lot River valley and portions of the Aubrac have been designated as UNESCO world heritage sites, for good reason. They are incomparable. 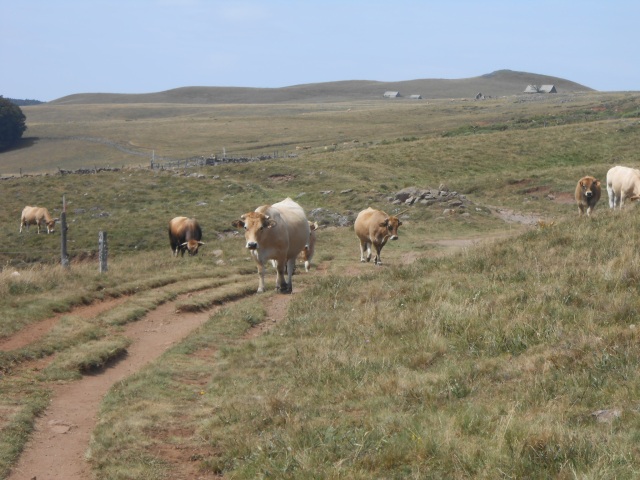 I have been staying in “gites,” which are the communal accommodations on the Via Podiensis, similar to albergues on the Spanish portion of the Camino. The main difference, is that I have also been requesting “demi-pension” when offered. (It just about always is.) With the DP option, you are served a family-style dinner, cooked in the family’s kitchen and often featuring regional specialties. You also are served a typical European breakfast in the morning, consisting of coffee, juice, toast, butter and jam. The overall quality of the food has been excellent – the French do love well-prepared food – and the convenience can’t be beat. It is during these communal meals that the Camino families really start to form. French is the language spoken, but I’ve discovered that even a little French goes a long way and the other pilgrims go out of their way to include you in the conversation and make you feel welcome and part of the group. 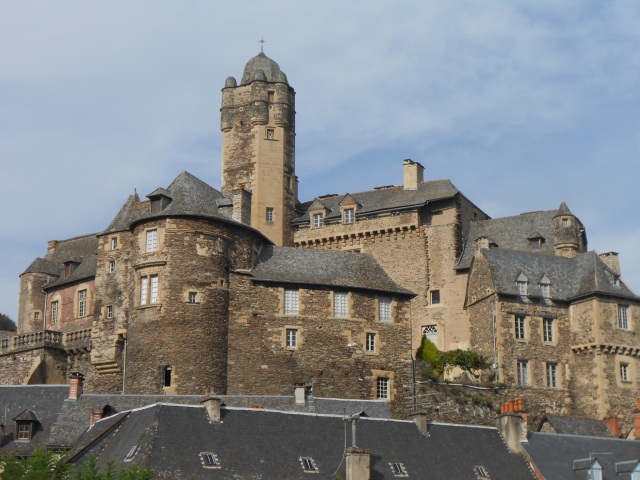 I have stayed in several lovely towns along the way, especially Aubrac where the gite was located inside a 12th century defensive tower (the oldest gite in France) and Estaing – the “most beautiful town in France.” (If you don’t believe it, there is a sign coming into town that will tell you so.) It really was quite beautiful, but not quite as beautiful as Conques. (Sorry, Estaing!) I have now covered almost 200 km (125 miles) and only have about 525km (325 miles) to go to reach St. Jean Pied de Port – the traditional starting point of the Spanish Camino (called the “Camino Frances” since it begins in France.)

I will strive to post a bit more frequently as the days go by. It’ll be more likely if the trail and weather really do moderate.

7 Responses to The most beautiful town in France…

Leave a Reply to Dianne and Dennis Cancel reply